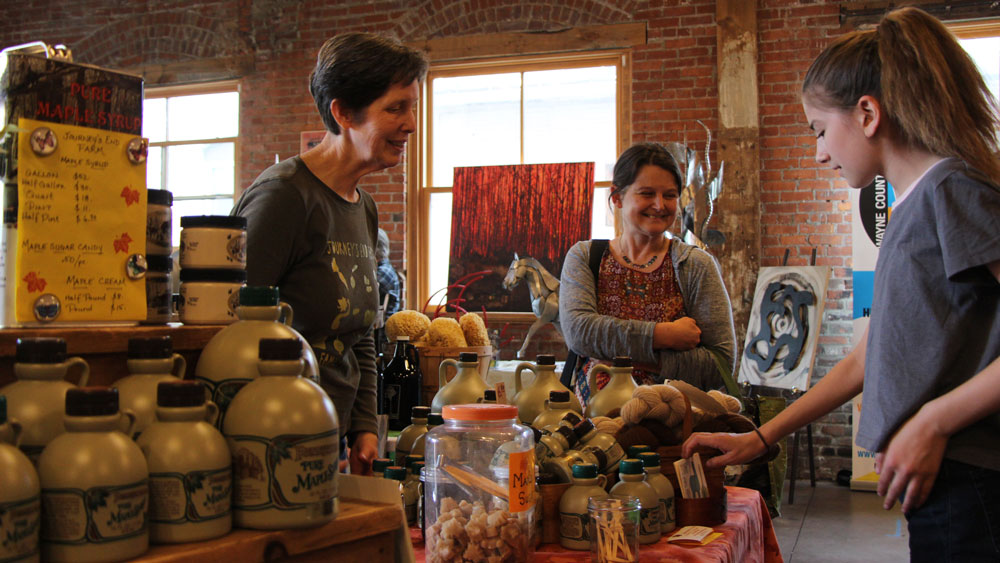 Upbeat folk music from a live string trio and the buzz of conversation help fuel the festive scene that has developed on a grey factory floor.

The market is busy but no one seems to be in a hurry. Customers stop at each stand and chat a while before moving on to the next.

That’s because the shoppers who come to this market aren’t just here for groceries. They’re here for a story. They want to know where their food came from, how it was produced and who made it happen.

That opportunity to make those farmer–consumer connections is among the reasons Kristin Curtis enjoys markets at the Cooperage.

Curtis sells maple syrup and maple syrup products she produces on Journey’s End Farm in southern Wayne County. She begins each exchange by offering the customer a sample of maple butter and explains that despite its creamy consistency, the only ingredient is pure maple sugar.

“I like it and it’s gratifying when people are interested in what you do and how you make things,” Curtis, a Farm Bureau member, said. “It’s just really fun to teach people about maple syrup and it’s fun when people appreciate what you make.”

Main Street in Honesdale is about a half mile of quirky shops and independent restaurants and cafes nestled between the historic Stourbridge Line – known as the birthplace of American railroading – and the Lackawaxen River. The Cooperage is in the middle of it all, set back from the neighboring storefronts by a gravel lot.

As the name suggests, the building was home to a barrel-making operation when it was constructed in the 1860s. But Prohibition shuttered the wineries and distilleries that used the barrels and the facility eventually closed. It was later a car dealership and garage. Then it sat vacant.

In 2009, area farmers began holding a small market in the front lot. That morphed into an effort to restore the building and, in 2012, the Cooperage was reborn as a space for community events.

“Our mission is really around bringing people together around things they have in common,” said Ryanne Jennings, Executive Director of the Cooperage Project, the nonprofit that manages the facility.

The facility hosts anywhere from three to ten events a week, ranging from swing and contra dancing to educational workshops to musical and theater performances to community board game nights. “We kind of have a little bit of something for everybody,” Jennings said.

But the flagship attraction remains the farmers market.

The Cooperage hosts weekly markets in November and December and bi-weekly markets January through March. The monthly Stourbridge Pie market, held the second Tuesday May through October, began this year. Since it’s tough for farmers to commit to a weekly market during the busy season and options like community supported agriculture reduce the need for customers to visit a market each week, organizers switched to a monthly format that pulls farm-fresh foods, artisan products and the local arts scene under one roof.

“We really wanted to make it a collaborative market so everybody had a stake in it,” Jennings said.

In addition to farmers, food vendors and businesses, each market showcases a member artist from the Wayne County Arts Alliance as well as live musicians. And the market coincides with Romping Radishes, a children’s healthy living program that meets upstairs.

Amy Theobald of nearby Riverside Farm and its on-site Creamworks Creamery scoops ice cream and sells other dairy products from a truck parked outside.

Shoppers have questions about everything from farming practices to the farm’s location. Theobald, a Farm Bureau member, looks forward to those discussions. She’s found customers gain more appreciation for the ice cream when they can speak with the farmer who produced it just a few miles away.

“They love it because they know it’s fresh,” she said. “They know where it came from.”

It’s that social and educational aspect of the market that Theobald especially enjoys. In her eyes, it serves an important community role as people grow more isolated.

“It tries to pull people out of their homes and take them away from their electronics to be social,” she said.