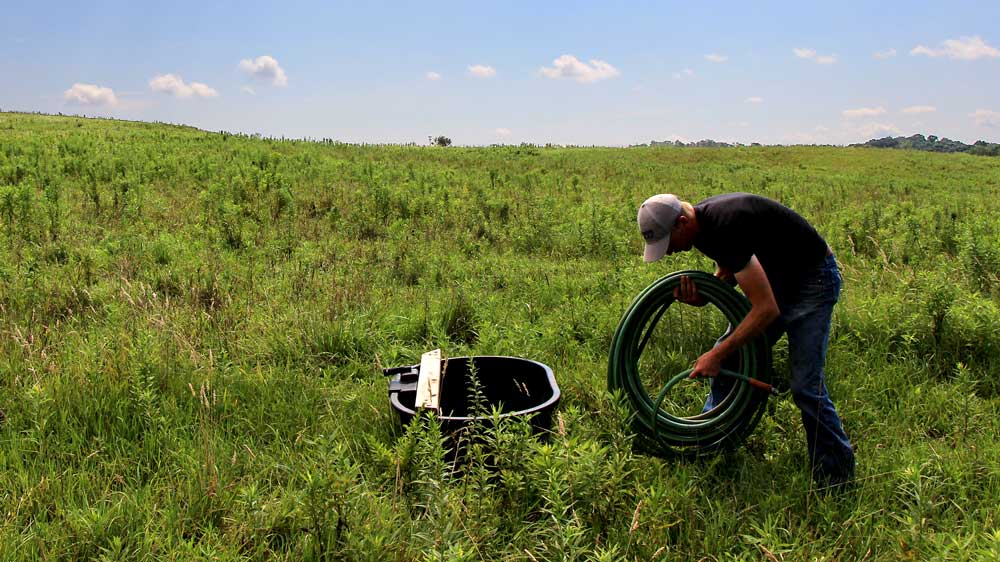 John-Scott Port moves a water trough closer to where his grass-fed cattle are relaxing in the pasture.

Clarion County farm works to make its own destiny by selling local beef directly to customers.

It’s Thursday morning and John-Scott Port is busy donning one of the many hats he wears around his family’s Clarion County beef farm.

This morning, he’s a retailer. It’s a delivery day and all the steaks, roasts, and hamburger ordered by customers in nearby Oil City need to be weighed and packed so that Port’s father, John Port, can drive them out to a designated pick-up spot.

Selling direct to customers has its benefits and rewards, Port says as he weighs and prices steaks. But simultaneously playing the roles of farmer and grocer can also be taxing.

“It takes a huge portion of my day,” he says, adding that he essentially works two full-time jobs.

Still, the 31-year-old Port wouldn’t have it any other way. There’s nothing wrong, he said, with how his father and uncle, Scott Port, marketed their beef for years: selling to meat processors who stock the grocery store meat counters. But that wasn’t for him.

With the shift to selling direct to customers and local restaurants—an endeavor that began as Port’s high school senior project—he’s found an outlet to flex his creativity as he crafts the farm’s brand and builds a market. And the opportunity to try something unique provided him with an incentive to return to the farm after college.

“It gave me a place to come back to,” said Port, a Farm Bureau member. “We launched this and it was a sort of place for me to fit in that was different.”

The shipment to Oil City is ready and Port puts on his farmer hat. His grass-fed herd—a new project he’s working on to complement the farm’s corn-fed beef—has retreated to a shady area of the pasture to escape the sweltering early-August heat. The problem is the cows’ water trough is across the pasture.

On the pickup ride out to move the trough, Port reflects on the third hat he often finds himself wearing: marketing consultant.

He talks about how he takes care to be clean-cut, professionally dressed and well-spoken when he meets customers at the farmers market and how he can get frustrated when others don’t do the same. Farmers are forever fighting the old stereotype that they’re dirty and simple, he says. But if you want people to see you for the multi-talented professional that you are, you have to dress the part.

It’s a minor point, he acknowledges, but as he’s learned at the farmers markets: “retail is detail.” And it’s a fitting segue into his philosophy on the future of farming. There’s so much talent and promise in agriculture, he says, and unlocking its full potential will take farmers breaking out of their comfort zones.

“This is the kind of stuff that I stay up and think about at night,” Port says.

It’s those thoughts that keep Port up at night that have helped Clarion Farms build a name for itself in western Pennsylvania.

Through his senior project experimenting with direct sales, Port found that the same beef being offered in supermarkets under a generic brand label developed a loyal following when customers had a chance to meet and learn about the farm family who produced it. The family soon decided to shift entirely to selling its own beef. Port was still at Penn State at the time and would come home on weekends to help on the farm.

“It was no small effort to get that much beef moved,” Port said. “We joined a lot of farmers markets. We talked to a lot of people. And that really laid the foundation.”

The farm partners with a local butcher to process the meat. Farmers markets are still a big part of the business but the farm has opened other avenues as well. The Ports take orders online from customers in Pittsburgh, Oil City and Indiana and then deliver the meat to drop-off locations at specific times. There’s also an on-farm store, the Beef Barn, and the farm sells to a handful of area restaurants.

“It’s a good feather in their cap because they can support local in their menu,” Port said. “And it helps us out tremendously because they’ve been very supportive.”

The first restaurant to buy the Ports’ beef was Daddy’s Main Street, a sandwich joint in Clarion. Ten years later, Daddy’s sources about two-thirds of the meat for its half-pound burgers from Clarion Farms, the most the farm can supply while also meeting other demand.

Owner Dana Troese, who runs the business along with his son, Darren, said he’d buy all his beef from the Ports if he could. He said the quality of Clarion Farms’ ground beef stands out.

“Burger’s one of those things you just think is all the same—and it’s not,” Troese said.

The restaurant often promotes its burgers’ connection to local agriculture and customers have responded enthusiastically.

The enthusiasm for local food is also evident at the Ports’ Beef Barn, which operates as a food store in its own right. Along with beef grown by the Port family, John and Deb Gruber sell their own pasture-raised pork and chicken at the store. Both families have formed a working partnership, helping each other at farmers markets and promoting their products.

Having other local farms sell their products at the store has been a win for everybody, Port said. It helps the Beef Barn attract customers, enables other farms to tap into the market Clarion Farms has built, and gives customers a one-stop shop for local food.

“We have this customer base, it’s kind of an asset to us,” Port said. “They want to buy local and we could sell them beef forever. But if we can sell them apples, it’s another option we can offer them.”

Each Wednesday, the Port and Gruber families jointly sell their products at the Beef Barn, along with another family who grows produce on the Ports’ farm. Their aim is to help customers with menu planning by offering tips and recipes.

Cheyna Griggs, who lives in nearby Corsica, was one of those customers who stopped by the Beef Barn on a summer afternoon to get a few ideas for weekend meals.

“You can’t get better meat than this,” Griggs said. “I like knowing about where my food comes from.”

Helping customers understand how these farms operate has always been part of the appeal of selling directly to the public, Deb Gruber said. And naturally, when you talk a great deal about your farm, you build a relationship with your customers, she said.

“We keep a photo book of pictures so that we can show our customers our farm,” Deb Gruber said. “They really want to know about our family.”

The walls of the store are decorated with hand-written posters telling anecdotes about farm life. Port also tells the farm’s story through social media, its website and face-to-face discussions with customers. But talking to customers is only half of building a relationship, he’s found. You have to listen as well.

Port said he tries to avoid the mindset that he knows best because he’s the farmer and instead, recognize that customers have valid questions and concerns about their food. When a customer has a misconception about farming, Port said he’s careful to listen respectfully while also seeking to educate.

When he started selling at farmers markets, some shoppers were hoping to find grass-fed meat, instead of the corn-raised beef he had to offer. But as Port listened, he learned their concern had less to do with what the cattle ate than how the animals were raised and cared for. As he discussed his family’s farming and animal welfare practices, those same customers were willing to try his corn-fed beef and became loyal customers. At the same time, Port started his grass-fed herd to give customers that option as well.

“You have to train yourself to respond to what people do want,” he said. “What I’ve learned is that you can learn a lot from your customers too. It’s not a one-way street.”