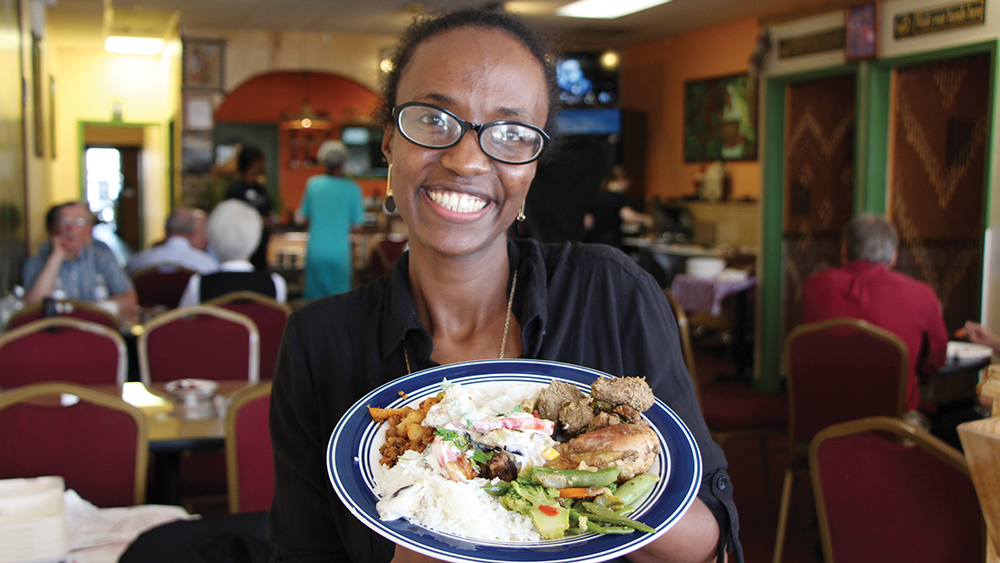 Patience Buckwalter of Grape Leaf Café holds up a plate of Sudanese food during a pop-up buffet.

Story and photos By Liam Migdail

It’s Sunday afternoon and Awash Ethiopian Cuisine is closed for the day. But the Lancaster restaurant is anything but quiet.

A bouquet of aromatic spices, beef, onion and a hint of lime wafts out the open front door, inviting visitors inside. In the dining room, there’s a low hum of chatter as guests sample a buffet of authentic Sundanese dishes.

In the kitchen, Lubna Harran is busy over the stove in a role she’s quite familiar with: cooking for a crowd. Back home in Sudan, it wasn’t uncommon for her family to host communal meals for 100 people or more. She gained her culinary chops at her mother’s side, sometimes helping, sometimes getting in the way. It’s hard for her to pick a favorite dish.

“I love everything I cook,” she says.

Now a resettled refugee living in Lancaster, Harran brings the flavors she grew up with to the heart of Pennsylvania Dutch country through Grape Leaf Café. The pop-up restaurant gives refugee and immigrant women a chance to showcase the cuisine of their home countries.

“You’re far from your country but still able to make your own food,” Harran comments as she glances around the busy dining room at Awash, which lets the Grape Leaf Café use its building when it’s closed on Sundays.

She’ll be the first to admit that cooking isn’t her forte—she’s a social worker and adjunct college professor. But the business grew from her passion for learning about other cultures. One thing she’s found holds true between many cultures around the globe: The bond that connects families, friends and neighbors is food.

“Food is the love language,” she said.

Buckwalter takes care of all the logistics: organizing café’s pop-up appearances, lining up commercial cooking space, buying ingredients, hiring servers (usually local high school students) to work the events. The cooking is left up to her roster of refugee and immigrant women.

Her hope for the café is that it gives the resettled refugees a chance to make a connection with their new communities. She has just one requirement of prospective chefs: They must love to cook.

“I want to give them work that they really enjoy doing,” she said.

At the same time, Buckwalter said, customers get a truly authentic food experience as they sample ethnic dishes prepared by women who pour their hearts and souls into their cooking.

“You get that extra level of care from the cooks,” she said. “You see their passion and their love of what they can offer the community through their cooking skills.”

In many ways, Buckwalter’s own background sparked her interest in foreign cultures. She was born in Ethiopia, adopted by an American family and grew up between upstate New York and Lancaster County. Her mother encouraged her to learn more about her Ethiopian roots, as well as other world cultures.

That’s how Buckwalter got to know Najah Al Dakhil, who moved to Lancaster in 2008 as a refugee from Syria. Buckwalter’s mother had spent time in Syria while living for several years in Jordan and—upon learning that Dakhil and her husband, Mohammed Nasir, had moved in on the block—made a visit to welcome them to the neighborhood. The families became fast friends.

Dakhil grew up cooking alongside her mother, preparing food for her family of 14 siblings. When she moved to Lancaster, she kept her culinary skills sharp preparing dishes for a local church’s monthly international food fair.

“That’s just my passion,” Dakhil said of cooking. “And it’s a lot of fun.”
When the church events fizzled out, Buckwalter—a big fan of Dakhil’s cooking—started brainstorming other ways the food could be shared with the community. That led to the creation of Grape Leaf Café.

It started with take-out platters that customers could order on weekends. But with the invitation to use Awash’s kitchen and dining room, the café was able to expand. Buckwalter organized the first buffet—featuring Dakhil’s Syrian cuisine—in March. She’s also added more cooks to the rotation, featuring Somali, Sudanese, and Ethiopian dishes with plans to add even more.

In addition to the monthly buffets, the café has a presence at many community fairs and food events throughout the area. Buckwalter notifies customers of upcoming events through Facebook as well as an email newsletter.

To comply with state regulations, Buckwalter rents commercial kitchen space so her cooks can do prep work for pop-up events. Her dream is for the café to have a more permanent home.

“Our hope in the next year is to either have a food truck where we have that kitchen prep space or our own space,” she said. “I’d like to see it expand, to offer more.”

While running the café is a lot of work on top of her full-time career, Buckwalter said it’s all worth it when she sees her cooks light up at the chance to share their passion. She remembers Dakhil smiling as she poked her head out of the kitchen to see the crowd of people who had come to sample her Syrian food.

Dakhil remembers that moment well too. She feels a connection with her roots in Syria when she cooks. And sharing her cooking with her new community is rewarding, she said, especially when she can see it’s appreciated.

“I’m very proud when people love my food and they haven’t had it before,” she said.