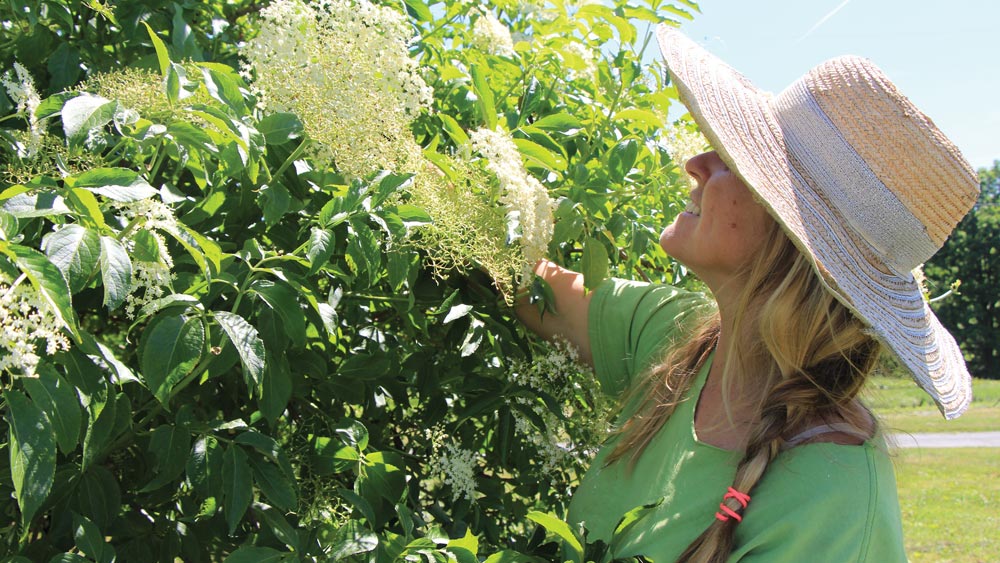 There’s something wild about the swath of farmland where Lancaster Farmacy—a farmer-owned producer of herbal medicines and health products—grows some of its perennial herbs.

Bumblebees and butterflies make their rounds among the colorful blooms of flowering herbs that stand out from a hodge-podge of leaves and weeds and grasses. Plants hand-picked for their medicinal properties grow alongside volunteer weeds that would be the bane of many farmers and even home gardeners.

But it’s a planned and intentional chaos that farmers Elisabeth Weaver and Casey Spacht have cultivated. After planting the perennial herbs years ago, they stepped back and let nature run its course. As native plants began to reclaim the land, they found many of the weeds to be just as useful in their products as the herbs they had planted.

And she added, the weeds that can’t be harvested and used serve another important purpose: Attracting pollinators that are needed for the farm’s other herbs, flowers and produce crops to thrive. “In July, it’s literally a butterfly museum here,” Weaver said.

The wild area is only a small piece of Weaver’s and Spacht’s Lancaster County farm, but it says a lot about their philosophy of giving back to the land and embracing the unusual. Amid the growing local food movement, they’ve found a unique niche providing customers access to locally grown medicinal products as well as fresh flowers. And when it comes to food crops, they farm supply their organic foods cooperative with the less common crops like jicama and rhubarb while other member farms provide the staples.

Weaver grew up in rural Lancaster County, surrounded by Amish farms. She went to school for community development and social change and moved to Massachusetts to work in the non-profit sector. But after feeling burned out in that field, she returned home and began teaching art classes as she considered her next steps.

She met Spacht and they later married. At the time, Spacht was starting Lancaster Farm Fresh Co-Op, a non-profit cooperative of more than 100 farms in the Lancaster County area that markets organic food throughout the Mid-Atlantic via community-supported agriculture and wholesaling to stores, restaurants and institutions. Weaver saw an opportunity to fill a need that wasn’t yet being met by local farms: health care.

In Massachusetts, she had developed a passion for herbal medicine while seeking to address her own health issues. She jumped in head-first, working on an herb farm, doing research and studying under well-known herbalists.

“I just got really excited about growing herbs and learning about herbs and using herbs medicinally,” Weaver said. “You just kind of get into it.”

Having benefited from using herbal medicine to nourish and balance herself, she saw an opportunity to help others.

“I wanted to help empower other people to know that there’s other options than just dealing with pain all the time and just suppressing it,” she said.

So Weaver and Spacht each kicked in $1,000 to get the dream started. They rented five acres of organic-certified farmland just outside of the Lancaster city limits and began planting.

Weaver soon left her job to run the farm full-time. When their son was born a few years later, they brought on two full-time employees to help with the operation. They also offer internships and host planting days where community members can learn about agriculture as they help on the farm.

Now, in addition to the wild zone, there are cultivated fields and a high tunnel, an open, greenhouse-like canopy that allows for an extended growing season. Annual crops are started from seed in a greenhouse. Altogether, the farm produces about 75 varieties of herbs as well as flowers, garlic and a few vegetables.

“It’s really kind of evolved and it’s nice because when you farm, you can change every year based on what worked or didn’t work the year before,” Weaver said.

The majority of the crops are sold through the Farm Fresh cooperative although the business also offers some direct sales online. The herbs are dried on the farm and crafted into medicinal tinctures, tonics, tea blends, body care products and more.

“We really have a hand in every step of the process, which we really believe in because we know the quality is there,” Weaver said.

For customers looking for an introduction to herbal medicine, Weaver recommends the herbal medicine community-supported agriculture share. CSA members receive a collection of Lancaster Farmacy products quarterly, with each package designed to address health needs of that season. The spring shipment, for example, may focus on detoxifying and curbing seasonal allergies. The summer package often includes herbal sunscreen, bug repellant and lip balm.

“We try to be full-spectrum,” Weaver said. “Whatever people use, we want to have that.”

The farm also participates in the cooperative’s flower share, which gives customers a weekly floral arrangement from one of several farms, including Lancaster Farmacy.

“You get to see the seasons changing through the unique varieties (of flowers) each of us have on our farms,” Weaver said.

For Weaver, the floral arrangements have been an outlet to combine her passion for farming with her background as an artist. In addition to supplying the weekly share, she also takes special orders for flowers and offers custom floral design for weddings and other special occasions.

Looking to the future, Weaver said she expects Lancaster Farmacy to continue to evolve but stay true to its commitment to quality and protecting the land. Even after farming for a decade, it’s still a continual learning process, she said. But she and Spacht have found plenty of support among their fellow farmers, especially those they work closely with through the co-op.

“We definitely have community support,” Weaver said. “Everybody shows up and helps each other.”