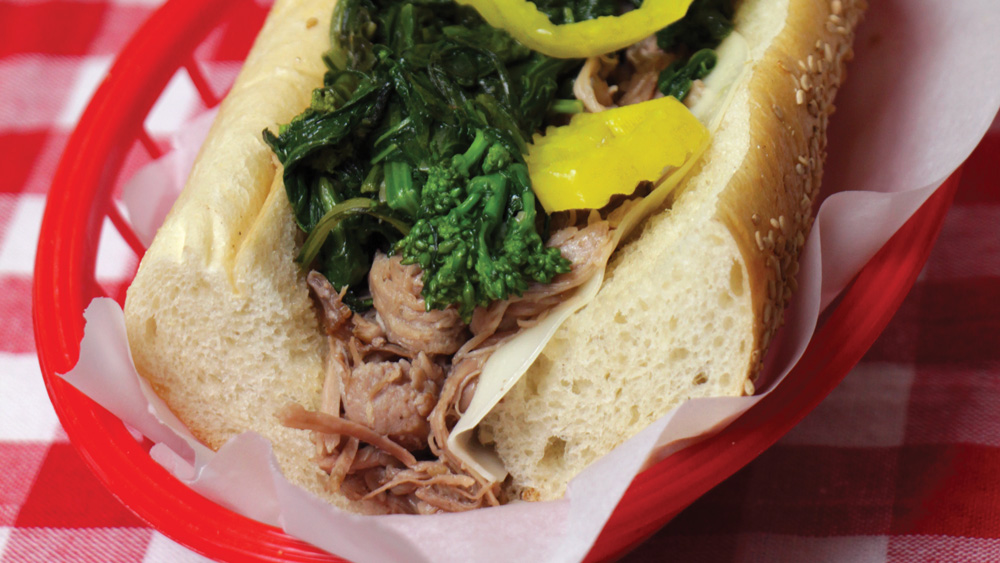 There are two truths about sandwiches that Pennsylvanians know, depending on which side of the Susquehanna you’re on.

First, in the west, is that French fries belong on, not next to, the sandwich. And in the east—the most authentically Philly sandwich is not the cheesesteak.

Largely unknown outside of southeast Pennsylvania, the roast pork hoagie combines Italian-seasoned slow roasted pork. garlicky greens and a little spice for a flavor that can’t be beat.

Heat two tablespoons oil over medium heat in an oven-safe Dutch oven. Brown pork roast on all sides and set aside. Reduce heat to medium-low.

Add onion and sauté until translucent and just starting to brown, about 10 minutes. Add six garlic cloves, minced and ¼ teaspoon red pepper and sauté until fragrant, about a minute. Add red wine, increase to medium-high heat and deglaze the pan by scraping up brown bits with a wooden spoon. Simmer until liquid is mostly reduced. Stir in the whole can of tomatoes and broth. Crush the fennel seeds with a mortar and pestle or the bottom of a heavy pan and add along with rosemary, parsley, thyme, marjoram and bay leaves.

Bring broth to a simmer, mixing occasionally. Place pork roast fat cap facing up in the broth, cover and cook in preheated oven until pork easily shreds, about four hours.

Alternate method: To use a slow cooker, follow above steps but add only two cups chicken broth. Add pork and broth to the slow cooker and set for four hours on high or eight hours on low.

Once pork is cooked, remove from broth and let rest, tented with foil, for at least 20 minutes. Meanwhile, bring broth to a simmer on the stove, reduce by half and strain. Shred the pork by pulling apart with two forks and toss in about a cup of the broth.

To make the greens, bring a pot of salted water to a boil. Remove tough stem bottoms from broccoli rabe and chop into bit sized pieces. Blanch the greens by adding to the boiling water for about a minute and then immediately cooling in a bowl of ice water. Drain the cooled greens and pat dry with paper towels.

Heat three tablespoons oil in a large pan over medium heat. Thinly slice remaining garlic cloves and sauté along with ¼ teaspoon red pepper flakes until garlic begins to crisp, about three minutes. Add broccoli rabe and sauté until it begins to get crispy, about six to eight minutes. Remove from heat.

To assemble the sandwiches, slice into the side of the hoagie rolls lengthwise, cutting only two thirds of the way through, and open like a book. Line each roll with three slices of provolone, top with pork and then the greens. Garnish with banana peppers or long hots if desired.