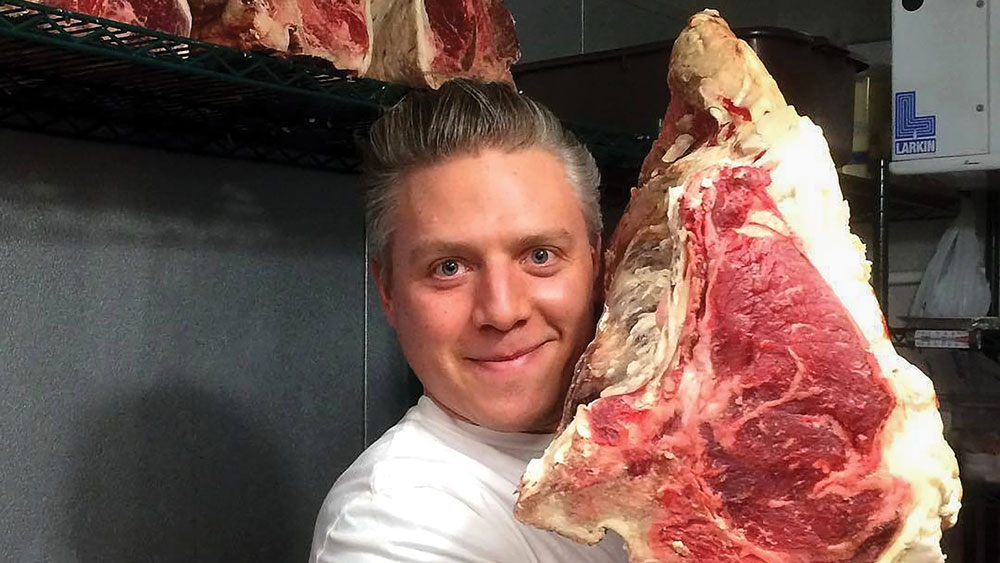 But his heart is in his native Pittsburgh.

Young grew up with the culinary influences of the Germans, Italians and Scotch-Irish that define life in the Steel City. He’s bringing that influence to Whitfield, a neighborhood steak house located in the Ace Hotel in the city’s East Liberty neighborhood.

“The biggest thing is we want to be known as fine purveyors of Western Pennsylvania cuisine,” Young said.

Young’s culinary journey began in Brooklyn, where he opened the renowned Meat Hook, a whole-animal butcher shop that works with regional farmers for pasture-raised meats. From steaks to sausage, Young cut his teeth on turning the whole animal into gastronomic treasure.

He’s brought that same approach to Whitfield. In doing so, Young has worked with farmers across Western Pennsylvania to bring the flavors of the region to Pittsburgh.

“A lot of our dishes are classic dishes, but we execute them in a Western Pennsylvania sense,” Young said. “We want to show off the produce and proteins we have in this region. We have such a wealth of ingredients, a real breadbasket.”

Among the farmers that Young is working with are Cheryl and Neal Saylard, Farm Bureau members who own Jubilee Hilltop Ranch in Bedford County.

The Saylards themselves have become sought-after suppliers in the Pittsburgh restaurant scene, working with a number of local restaurants including Legume and Burgh’ers.

Young wanted to make a point of using grass-fed, grass-finished animals at Whitfield. Consumers are growing increasingly interested in local foods and want to understand more of the sources of their food.

“That’s a foundation of our shop in Brooklyn. We look for grass-fed animals from local sources—those who are really going through the details,” he said. “If consumers have questions, we know those answers and can be absolutely transparent.”

Working with local farmers has its advantages—from knowing the growers to being able to share their farming philosophy, Young said. But at the same time, chefs have to be flexible on the dishes they serve and their approach to the menu, based on what is in season and the availability of certain cuts of meat.

Like a good butcher that can recommend a variety of cuts, a restaurant needs that same flexibility to keep customers satisfied, Young said.

“If you are going to have a steak house, you need steaks. If you are working with farmers, you need the whole animal,” he said. “You need to have great servers, a versatile menu and farmers that are willing to work with you.”
When the Saylards started raising beef on their farm in Morrison’s Cove, they had their sights set on Pittsburgh.

After working with a few restaurants, their reputation of providing quality beef, along with a consistent product, helped them grow their presence in the Steel City.

The Saylards came into farming somewhat later in life. Neither grew up on a farm, but Neal spent his career working with farmers on animal nutrition.

The couple had always wanted to buy a recreational property for hunting and fishing. In the beginning, the Saylards had wanted a place where their college age kids and friends could come as a Christian retreat. But it has turned into a business for the couple’s children, Ryan and Erin.

The property, with rolling hills and an old log cabin, made an excellent place to pasture raise beef. So they fenced it in, brought in 90 cows, and embarked on a marketing venture to sell those animals.

“The best thing for us is to see our kids want to make a career out of the farm,” Neal said.

Going into the business, the Saylards planned on direct marketing their animals, and looked to Pittsburgh and its growing local food movement.

“My son, daughter, and their friends all expressed interest in this type of farm,” Neal said. “We visited restaurants to see their level of interest, and it was significant.”

They started selling beef to restaurants throughout the Steel City. What they found is chefs wanted as much locally produced meats as possible, which led the Saylards to branch out with chicken and pork. Over time, they also added eggs, now selling 600 dozen eggs a year.

The animals live out on a pasture year round—though the chickens have a portable shelter that’s moved from field to field by tractor. On occasion, chefs will stop out to the farm to visit with the Saylards, so they can better tell the farm-to-table story to restaurant customers.

“Pittsburgh is a prime location for local farming,” Neal said.

Sometimes, after making deliveries in Pittsburgh, the Saylards stop by a restaurant that uses their meat on its menu.

To be sure the Saylards feel a sense of pride seeing customers enjoying the animals they cared for on their farm in Bedford County. But they are often amazed at what those talented chefs can do with their beef, pork and chicken.

“I can make a good steak,” Neal said. “But when I’ve had my steaks at some of these restaurants, they taste unreal.”