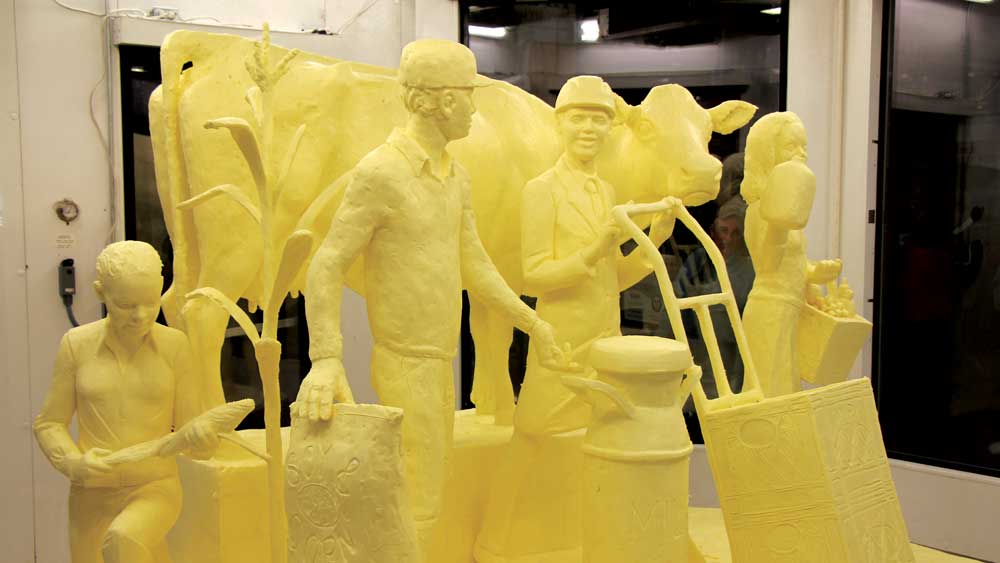 On a dairy farm, the Pennsylvania Farm Show’s iconic butter sculpture gets second life as electricity.

Story and photos by Liam Migdail
Infographic by Holly Cohick

The star attraction of the Pennsylvania Farm Show’s short stint in the spotlight is marked by matching bookends. A half-pound butter sculpture celebrating the state’s agricultural heritage, it begins and ends its existence on a dairy farm.

After the crowds have gone home and the show closes for the season, volunteers scrape the 1,000 pounds of butter off its chicken wire frame and into plastic trash bags. Juniata County dairy farmer Brett Reinford then loads the butter into his pick-up truck and takes it an hour north to the farm.

There, the butter is converted into methane gas, which is used to heat the farm and generate electricity. The butter sculpture alone generates enough electricity to power three houses for three days.

Reinford Farms has taken the Farm Show butter sculpture for the past six years. “We’re happy to get it,” said Reinford, who runs the 650-cow dairy with his parents and siblings. “It’s great for our farm and it makes good gas. It’s a really good way to recycle instead of sending it to a landfill.”

The magic is made possible by something called an anaerobic digester. It looks like a covered, above-ground swimming pool and functions a lot like a stomach.

The Reinfords, Farm Bureau members, take in food waste year-round from grocery stores. When the remnants of the butter sculpture arrived on a chilly January morning, there was already a motley of discarded items—moldy oranges, meat trimmings, stale bread, the tops of pineapples.

The food waste goes into a machine that grinds it into a slushy-like mixture and separates out any packaging materials. That blend is mixed with manure from the dairy barn and pumped into the digester.

There, it all becomes a delectable feast for microscopic bacteria that break down the food and manure, expelling methane gas as they work. The methane rises to the top of the tank and is transported to a gas-fired engine.

Heat from the engine is used to dry crops and supply the farm buildings and house with heat and hot water. At the same time, the engine generates electricity that’s sold back to the grid. On an average day, the electricity generated can power the farm plus 100 houses.

“We don’t have an electric bill because we produce more than we use,” Reinford said.

The benefit to the planet is two-pronged. The farm is able to dispose of manure in an environmentally friendly way while, at the same time, generating green, renewable energy.

“Environmentally, it’s awesome,” Reinford said. “We’re not using any fossil fuels to make our energy or heat our water.”

In addition, making power from food waste and manure has been a helpful side business to have along with the dairy farm. The Reinfords plan to expand the energy operation and a new digester, four times larger than the current one, is in the works.

While the digester works year-round, taking the butter sculpture is especially exciting, Reinford said. It provides an opportunity for the farm to demonstrate how farmers use technology and innovation to help the planet.