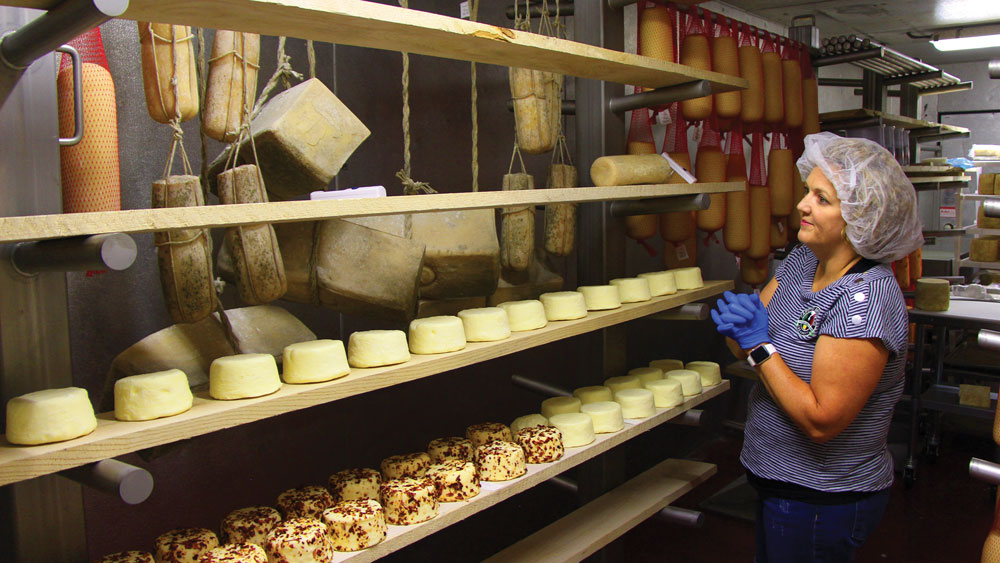 Above the large window looking out over the cheesemaking floor of Caputo Brothers Creamery, Rynn Caputo displays a framed photo to remind her of the “cute, little cheese business” she and her husband, David, started in their home almost a decade ago.

The meager setup in the photo is a far cry from the sophisticated cheesemaking operation on the other side of the glass. Beyond the window, the curd that will become the next batch of Troegenator Beer Cheese—a special collaboration between the creamery, Tröegs Independent Brewing, and Giant Food Stores—settles on the surface of a large vat. Nearby, a handful of employees are busy at work. One spoons fresh-cooked ricotta cheese into strainers to drain excess liquid. Another packages large blocks of cagliata curd, the building block restaurant customers will use to hand-stretch their own Italian, pasta filata (or stretched-curd) type cheeses, like mozzarella, provolone and burrata.

Along with the other changes, the York County creamery’s mission has evolved as well. Borne from the Caputos’ frustration over having difficulty finding authentic, Italian cheeses, the business has taken on the larger purpose of helping to save one of Pennsylvania’s most important industries. It’s summed in block letters on a signboard behind the counter of the on-site cheese shop: “The curd that saves the herd.”

Caputo Brothers sources its milk exclusively from two nearby dairy farms and has plans to bring on more as cheese production continues to expand. And through practices like buying directly from farmers, paying well above the mailbox prices farmers would typically receive for their milk, and controlling ancillary costs by taking care of transportation and other logistics, the Caputos are hoping to perfect a model for how small businesses and small farms can join forces to thrive in an increasingly hostile economic climate.

“We feel like the time is upon us to just shift the paradigm, to just look at dairy in a different way,” Caputo said. “We really need our dairy farmers to be sustainable. If either of us goes away, the other is hosed.”

The Caputos, Farm Bureau members, were working in Fortune 500 jobs (Rynn in supply-management tech and David in pharmaceutical sales) when they met on the Jersey shore. They decided on their honeymoon to quit their jobs and go to culinary school in Italy. They came back determined to work with food and began brainstorming how they could put their new culinary skills into practice.

It wasn’t long before they identified a need that was not being filled. In Italy, they had enjoyed access to cheeses made the traditional way, using bacteria cultures to ferment milk, separating the curds and whey. At home, authentic, Italian cheese was difficult, if not impossible, to find. So they started Caputo Brothers—named for their now 11- and 9-year-old sons, Giovanni and Matteo—and began making mozzarella to sell at local farmers markets.

“If there had been good quality ricotta and mozzarella in this country, Dave and I would have done something different,” Caputo said.

Today, the creamery has grown from a mom and pop operation to one with more than 20 employees producing about 250,000 pounds. And the operation is still growing. Production has expanded out of the Caputos’ home and into a commercial creamery in Spring Grove, about 10 miles southwest of York, which also houses a retail cheese shop and La Tavola, a venue where the creamery hosts farm-to-table dinners, cheesemaking classes and cooking demonstrations.

The cheese is sold at the store, online and in select groceries and specialty shops across the northeast and beyond. The creamery’s biggest market is the Pittsburgh area and national magazine coverage helped the Caputos break into the lucrative New York City market. Restaurants are a big piece of the customer base. Caputo Brothers mozzarella can be found on pizzas nearby—at places like Luca, a critically acclaimed Italian restaurant in Lancaster—and as far as Juneau, Alaska.

At first, Caputo Brothers sourced all its milk from Apple Valley Creamery in nearby Adams County. But as production expanded, the creamery needed an additional source for raw milk. So the Caputos bought a milk-tank trailer to pick up raw milk directly from farms and began looking for an additional supplier.

In 2018, years of financial stress on Pennsylvania dairy farmers reached a breaking point.

Facing an extended slump in milk prices amid rising production costs, many dairy families were forced into the heart-wrenching decision to sell their cows, stepping away from the lifestyle they loved and generations-old family businesses. Pennsylvania lost an unprecedented 370 dairy farms in 2018.

Daniel and Lori Baumgardner were among those feeling the strain.

The Baumgardners, Farm Bureau members, had spent their adult lives milking cows twice a day on their 200-acre farm in York County. Daniel’s father had bought the farm in the 70s, moving from another dairy in nearby Adams County. The Baumgardners raised their family there and made a living supplying milk to their dairy cooperative.

But in recent years, it became harder and harder to make ends meet. They were receiving about $12 per hundred pounds of milk—about 11 to 12 gallons—which cost $20 to produce.

“We were losing money every day we decided to stay in business,” Lori Baumgardner said. “By summer of 2018, we were having serious talks about: ‘Are we going to keep doing it?’”

“Over and over, it just came back to the cows,” she continued. “We all love the cows. They’re kind of our world. That’s how it is when you do this all your life. When you’re in dairy, it’s all you do.”

The Baumgardners thought about cashing in their retirement to get the funds needed to keep the farm afloat. But with no end to the dairy crisis in sight, they knew that was too risky. Painfully, they began to realize that the only path forward, was likely to sell the herd by the end of the year.

“We were just going backwards all the time,” Daniel Baumgardner said.

That’s when they connected with Rynn Caputo, who needed more local milk and was willing to pay more than double the going mailbox price. The week of Thanksgiving, Caputo Brothers’ new milk truck made its first pickup at the Baumgardners’ farm.

“When we thought we were going under, we had that horrible sinking feeling that everything we worked our rear ends off for was going down the tubes,” Lori Baumgardner said. “But then when it all came together, we had that hallelujah moment.”

Working hand-in-hand with Caputo, the Baumgardners adjust production to meet the creamery’s needs. It’s a different, and exciting, type of challenge, Daniel said. While his milk check before was based on quantity, the creamery is more interested in characteristics of the milk, like fat content and pH level.

The better milk price enables the farm to remain profitable while staying within a size that the family—the Baumgardners and three of their adult children who help on the farm—can manage on their own. And the Baumgardners say they take pride in the direct connection between their farm and a local product.

“It’s neat,” Lori added. “It’s been kind of exciting tasting the cheese that’s made from our milk.”

Turning the industry on its head

Caputo Brothers has benefited from the relationship as well.

“We buy directly from the farm, we control all the costs between and we sell directly to the consumer,” Rynn Caputo said.

That arrangement enables the creamery to pay its farmers what they need to remain financially sustainable into the future. At the same time, Caputo makes sure every ounce of the milk she buys goes towards turning a profit.

“We try to work with zero waste so we can literally get everything we possibly can out of the milk,” she said.

Raw milk from the farms is pasteurized, then heated with live cultures in a vat. As the milk ferments, the cheese curd separates from the whey. The leftover whey is cooked again to produce ricotta—which translate from Italian to “recooked.” Some of the ricotta cheese is sold and some is seasoned and aged to create the creamery’s award-winning ricotta salata vecchio. The creamery also produces and sells cultured butter from leftover milk fat, another byproduct of cheesemaking.

The Italian-style curd, cagliata, is essentially a blank canvass. With a little elbow grease and salt, it can be transformed into a variety of cheeses, including fresh mozzarella, provolone, burrata and scamorza. Caputo Brothers hand-stretches its own fresh mozzarella daily and also makes a variety of aged, spiced and smoked cheeses. But most restaurant customers simply buy the cagliata and then stretch the cheese themselves—with training from Caputo Brothers—so that it’s fresh each day.

“It’s like another tool in their kitchen when they can kind of be creative with different varieties of mozzarella,” Caputo said.

The creamery also sells cagliata to retail customers so they can stretch their own cheese at home as well as other do-it-yourself products such as a lasagna kit and make-your-own cannoli package.

The Troegenator cheese has been a bit of a different undertaking, Caputo said, as it’s more of a Gouda than Italian-style. But it’s proving popular. In mid-September, only a few weeks after shipping the first batch, the creamery had already sold 10,000 pounds.

Caputo said she has more than a dozen local farms lined up hoping to sell her milk. She can’t work with all of them—adding one more farm would mean tripling cheese production. But she hopes Caputo Brothers can serve as a model for how small dairy farms can survive by working with local processors.

She thinks back to her early conversations with the Baumgardners, when she learned just how dire a situation many dairy families are facing. And she thinks about what the promise of a successful future that their partnership has brought the family.

“They’re able to keep their kids on the farm. The next generation can stay,” Caputo said. “I think there’s this misconception out there that they are not interested. What we find is the next generation is extremely interested. The problem is if you’re a parent and you don’t see a path forward, you don’t want that for your kids. What we’re trying to say is: Yes, there is a future. We just have to turn it on its head.”