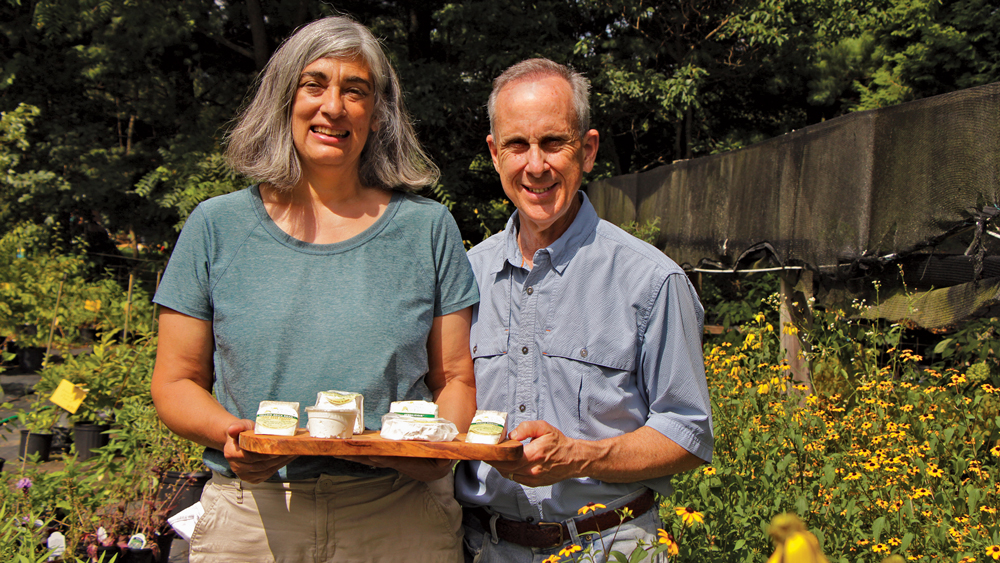 There’s a certain jolt of excitement that radiates through the barnyard when Catherine Renzi steps through the gate.

It’s a sunny day and on the hillside leading up from the goat pen, colorful blooms and the 190-year-old, stone farm house make a stunning backdrop to the barnyard shenanigans. Bees and butterflies, drawn by the allure of native plants, jump between blooms. They’re all—the divas, the historic buildings, the flowers and pollinators—part of the ethos Renzi and her husband, Al, have cultivated at Yellow Springs Farm.

There, the past is revived and re-imagined in a way that fits into the present. Food and nature intersect to, as the Renzis put it, “connect landscapes and foodscapes.” And all the Renzis’ efforts—from crafting artisan cheese from goat’s milk to protecting the environment and working to restore natural habitats—are focused on making a connection with their community.

“It’s a family farm because the community is our family,” Catherine Renzi said. “We want our neighbors to know something good is happening here, because we’re in this together.”

The Renzis’ cheese has earned national recognition, winning several awards from the American Cheese Society. But they’ve never had an interest in taking their brand national.

“That’s just not what brings us happiness,” Al Renzi said. “Our connection is with the community.”

The Renzis, Farm Bureau members, didn’t set out to be cheesemakers—or even farmers for that matter.

Corporate jobs brought them each to Chester County—Catherine’s a native of the Chicago area and Al is from Delaware. They married in 2000 and began looking for a home. Al wanted an old house to fix up. Catherine, who grew up around horses and spent some time working on farms in New England, wanted a little land to work with.

“I realized that probably the happiest days of my life had been the ones working outside with plants and animals,” she said.

They settled on an eight-acre historic farm in Chester Springs. The property, which can be traced to an original William Penn land grant, was once part of a larger dairy farm but had been out of production for decades. But the 1830 farm house, spring house and bank barn remained.

The September 2001 terrorist attacks led the Renzis to re-examine their priorities and the contributions they wanted to make to their community. They put a conservation easement on their land, which meant that it would be protected from future development and that they—and whoever owns the land in the future—would need to take certain steps to protect the environment and natural resources.

“We think of ourselves as stewards, that we’re going to leave this place one day hopefully better than we found it,” Catherine said.

Everything else kind of snowballed from there. The Renzis researched plants that were native to the area and began restoring natural habitats. That morphed into starting a nursery to produce native plants to sell to other, local property owners. For the Renzis, it was a way to start generating some income from farming while expanding their conservation ethic to the community.

“It wouldn’t make a difference if we just did it on our eight acres or so,” Al said. “But if another 100 families do it, now we have a habitat.”

They started selling their plants at local farmers markets and Catherine began doing consulting work to help other landowners restore native habitats. Around the same time, their Nubian goat herd was growing. They had started with just two females but started doing some breeding, thinking it would be nice to have an animal born on the farm. One thing led to another.

At first, the Renzis produced soaps and other products from their goats’ milk. But they saw an opportunity in cheese. With high demand for local food and artisan products, goat cheese could give them another source of income to help diversify and strengthen their farm business, allowing them to quit their corporate jobs and farm full time.

“It wasn’t a grand plan,” Al said, “just a natural evolution of how we wanted our lives to evolve.”

Just as restoring native plants brought back the farm’s past landscape, milking goats offered an opportunity to revive its dairy heritage.

“That was a beautiful thing to think of,” Catherine said. “We would restore the heritage of the farm on a scale that made sense for the 21st Century.”

And goat cheese provided a great outlet for the Renzis’ culinary creativity.

Many people are familiar with chèvre, the soft, spreadable cheese that’s often synonymous with the term “goat cheese.” But that’s only the tip of the iceberg and, like cheese made from cows’ milk, goat milk cheese comes in many varieties.

Yellow Springs Farm offers more than a dozen varieties with the lineup changing on a seasonal basis. There’s the classic chèvre as well as other fresh cheeses such as a goat feta and “Goat-za-rella.” There are aged cheeses similar to cow-milk counterparts such as cheddar and gouda. There are several varieties of soft-ripened cheeses, creamy varieties with a rind similar to Brie or Camembert.

The Renzis incorporate many unique flavors and elements into their cheeses. Black Diamond is aged coated in vegetable ash. Yellow Brick Road, a collaboration with nearby Victory Brewing Company includes beer.

Some varieties incorporate other flavors of the farm, such as Nutcracker, marinated in black walnut liqueur produced from trees on the farm; Purple Passion, made with lavender flowers; and Goat’s Beard, which incorporates with honey from bees on the farm.

The goats, spread across three locations, are milked twice a day. The Renzis craft the cheese in their on-farm cheese room and sell it at local farmers markets and a handful of retailers, including Kimberton Whole Foods, a regional chain in the greater Philadelphia area, and select Whole Foods Markets throughout the mid-Atlantic. They also have a cheese community-supported agriculture (or CSA) program that allows customers to pay a yearly membership fee to receive a monthly assortment of cheeses April through October as well as a special holiday sampler.

The Renzis have seen goat cheese rise in popularity since they started. More shoppers are looking for something artisan and local. Goat cheese has somewhat of a reputation for being classy and fancy, due in part to its European roots. It’s also a little more expensive as it’s more expensive to make. A cow produces a lot more milk each day than a goat.

“At the end of the day, you have to have a good product,” Al said. “And that’s what carries us through.”

While they’ve seen plenty of business from customers who already appreciate goat cheeses, the Renzis also work to educate customers and introduce them to varieties they may not be familiar with.

“I think it really goes back to making that personal connection,” Al said. “They can buy cheese anywhere and there are lots of great cheeses out there.”

That’s why, for the Renzis, being a part of the community is so important. Without customers buying cheese on a regular basis, they wouldn’t be able to live their dream. Likewise, the farm has become an important part of its customers’ lives.

“We have some people who started in our cheese CSA pregnant and now the child has been born and is a young person,” Catherine said. “When we do the open farm tours, we can have four generations come. Our farm, for them, is their family tradition.”

It’s a community, they said, that recognizes that a wheel of cheese is not just food—it’s the product of hard work of dedication, of enjoying the beautiful days and shoveling paths during snowstorms so the dairy divas will make their way to the milking parlor.

“We put our hearts into what we do,” Al said. “You really have to have that passion to create something authentic to who you are as a farm and as a couple.”