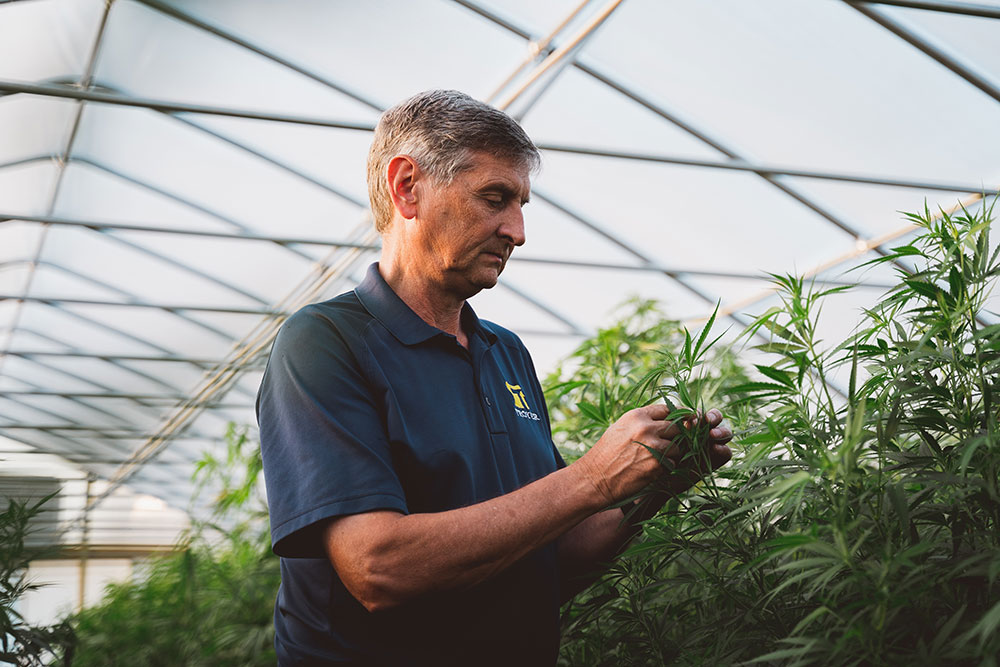 When Pennsylvania took steps to legalize hemp growing in 2017—ushering in a comeback for what had been a staple crop in colonial times—Mark Troyer saw an opportunity.

The veteran potato grower started looking into cultivating the crop on his Erie County farm with the hope of harvesting cannabidiol, or CBD, a compound said to have therapeutic uses ranging from pain relief to easing anxiety. His new business, Farmulated CBD, sells a full line of CBD products from hemp grown and processed right on the farm.

“It certainly hadn’t been a lifelong dream of mine to start this,” Troyer, a Farm Bureau member, said. “But when (hemp) became legal it just started making sense to us.”

Grown around the world for both fiber and oilseed, hemp hasn’t been a major crop in the U.S. since the 1930s. Due to its relation to the plant used to produce marijuana, cultivation of hemp was banned in the U.S. in the 1970s. But while hemp and marijuana both come from varieties of the cannabis plant, hemp does not contain significant levels of the psychoactive ingredient, THC, that makes marijuana a controlled substance. Even though the two look similar, they are very different plants. Simply put, hemp won’t get you high.

Different varieties of hemp are grown for fiber, oil, seeds or various products that contain the non-psychoactive CBD.

CBD products have been growing in popularity recently since growing and processing hemp has become legalized and regulated across the U.S. With the passage of the 2018 Farm Bill, hemp is now legally differentiated from marijuana. Last year, farmers in Pennsylvania grew an estimated 4,000 acres of hemp.

“We definitely knew it had a lot of potential there,” Troyer said. “A lot of people were just starting to hear about CBD and we thought it would be appealing to people.”

For Troyer, that potential was enough to grow his family farm beyond its 2,500 acres of potatoes, corn and other crops. His family has been growing potatoes in the Erie area since the 1950s, so he is no stranger to farming. Nor is he a stranger to running a business. His family started a potato chip company in 1967, and for 40 years, turned their own potatoes into the crunchy snack Pennsylvania is famous for. Troyer has since sold the chip business but he still sells about 150,000 bags of potatoes each year to the new owners.

In 2019, Troyer got all the proper permits from the state required to grow hemp and started planting. Then he began building the infrastructure required to produce the CBD products right on the farm, and Farmulated CBD was born.

“We are different from a lot of other CBD companies because we are handling each part of the chain,” said Tricia Restifo, Vice President of Finance for Farmulated CBD. “We are growing it, we’re extracting it, and it’s our products that we’re branding. (We control) all three steps of the process, which is rare.”

Troyer is growing seven acres of hemp which produces enough CBD oil to keep their business running for a year. He’s also growing a different hemp variety used for fiber in a separate field 15 miles away to prevent cross-pollination. Unlike potatoes, corn, and many other staple crops, growing and harvesting hemp is much more labor-intensive.

“The harvest process is a little painful to be honest,” Troyer said. “We have not invested in mechanization yet.”

The plants can grow up to six feet tall, and when ready for harvest, are chopped down with a chainsaw. The rows are spaced six feet apart so Troyer and his team can drive a trailer between the rows and load the plants as they go. After harvesting, the hemp needs to be dried.

“We hang it on these cables and winch it up to the ceiling,” said Restifo. “It takes about a week to get dry.”

The dried hemp flower is then put through a bucker, a machine that separates the flower from the stem, and then ground into what Restifo says looks like green coffee grounds. The resulting biomass is sent to the Farmulated processing center where a team of technicians and chemists go to work.
It takes about a week to process the biomass to remove impurities, and then distill it in the lab until just the pure CBD oil remains. Everything is tested by a third party and certified to make sure that any trace amounts of THC aren’t over the legal limit for hemp products. Then, the distilled oil can be made into various CBD products.

“We have two chemists on staff that take that crude (CBD oil) and distill it into our refined CDB oil,” Restifo said. “We have both full spectrum, which has low dosages of THC in it, and also isolate, which has zero THC. All legal, all within the legal limits.”

That’s the advantage, according to Troyer, of controlling the whole process from seed to finished product.

“We think it’s a purity issue, actually having control to give consumers the very best product available,” he said.

Farmulated’s most popular products range from tinctures to capsules to topical creams, and even pet treats. Troyer has heard many testimonials from customers who have found relief from their products. Though he admits there are those who are skeptical, Troyer believes a little education can go a long way to convincing people to try his products.

“People are certainly a little skeptical,” he said. “People still have that perception that it’s marijuana. But we’ve had great, great feedback.”

“We absolutely do not make medical claims, and never will, but there are a lot of stories of people being able to get off of some harder painkillers,” Troyer continued. “Even some more common ones—acetaminophen, ibuprofen—doing them day after day after day can be hard on your liver. So there’s been a lot of people that have got some relief by going the natural route.”

CBD has been known to help with inflammation, aches and pains, anxiety and sleep disorders. But in Troyer’s estimation, the chief benefit is the fact that CBD is a natural substance that is easily processed by the body.

“It’s a naturally growing product,” he said, “it’s been around for hundreds of years, and it’s helped countless amounts of people and it’s non-hallucinogenic. I said, try it, see how it works.”

Even pet owners are finding benefits, Restifo said. One customer uses the pet treats to calm down their dogs, who get anxious in the car when driving to dog shows. Restifo also said that older dogs can experience relief from joint pain. And they are also working on a capsule for horses.

“We’re kind of innovating to do horse pellets with CBD,” she said. “Some of the Amish community here have asked us to do this for them.”

Farmulated has seen both foot traffic into their on-site store, and virtual traffic on their website since opening for business late last year. They’ve been doing a lot of advertising on social media and they’ve worked hard to get their products into other local stores as well, including their own store in the local shopping mall, and Country Fair, a chain of grocery and convenience stores in the Erie area.

“They approved us to go into 40 of their stores,” Restifo said. “We are certainly excited. We are in some independently owned grocery stores here. We are in spas, pharmacies, and chiropractors, and just, you know, picking up momentum.”

Even through the COVID-19 pandemic, once the operation was able to safely reopen, business started picking up.

“People are starting to walk in again, with their masks on, but we do have a little retail store here in our office,” Restifo said. “And we have signs on our road, so that people know to come here.”

With the growing popularity of their business, Troyer and Farmulated are looking to expand a bit more in the coming months by looking into a wider range of botanicals and medicinal herbs.

“That is our vision, to try to get into some other botanicals,” said Troyer. “We’re trying to grow a little bit of echinacea, turmeric. This fall ginseng is coming on the farm. So, anything naturally grown that is starting to show some benefit to people is something we want to take a look at and be involved with.”

If you’re still skeptical, Troyer only asks that you give CBD a try.

“What we love is return customers, and testimonials of people that are coming back,” he said. “The thing we love about it is we’re doing it naturally, with a naturally growing plant.”