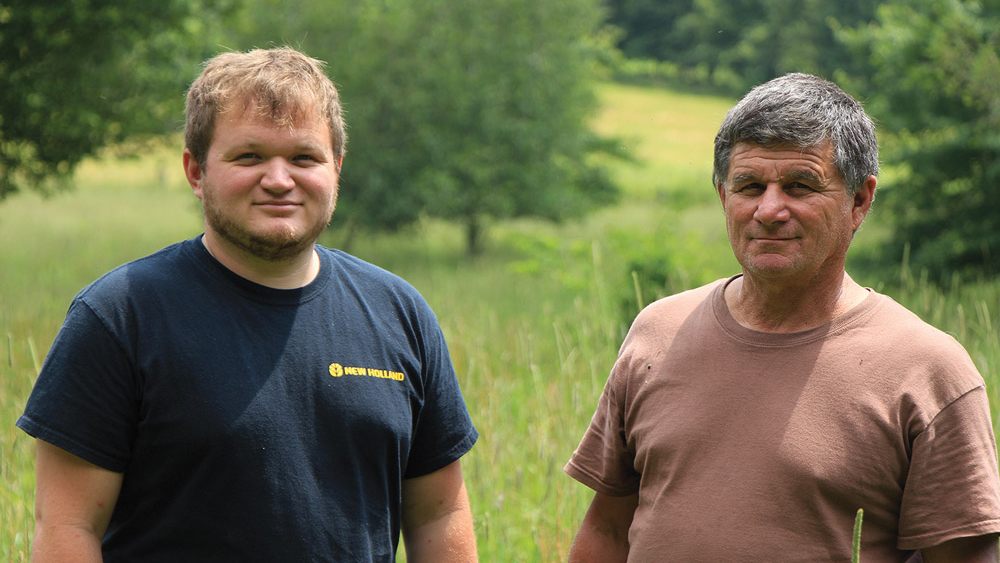 How a Northampton County beef farm built an award-winning formula for protecting and restoring natural resources.

Editor’s Note: Harvest Home Meats was selected last year as the first-ever Pennsylvania recipient of the prestigious Leopold Conservation Award. This year’s winner will be announced Jan. 10 at the Pennsylvania Farm Show.

On the hilly pastures of the DiFebo family’s Northampton County beef farm, there’s a delicately balanced ecosystem where cattle live in symbiosis with the land.

The pasture provides lush grass for the cattle to munch on as they take in a vista of the Delaware River valley’s rolling hills. In turn, the cattle maintain and fertilize the grass, improving the health of the soil and pasture.

The benefits of this relationship are many. A healthy pasture keeps nutrient-rich soil where it belongs—in the field producing nutritious grass—instead of washing away downhill to pollute streams and rivers. Parts of the farm even serve as a ‘carbon sink,’ pulling greenhouse gases out of the atmosphere and storing them in the ground. At the same time, the DiFebos are able to raise more cattle without increasing their environmental footprint.

In fact, it was a simple business decision prompted Rich DiFebo’s efforts to improve soil quality and protect natural resources. When he began farming on his in-laws’ former dairy farm in the mid-90s, the land needed some work to remain profitable. Erosion and diminished soil quality had hurt the land’s productivity. DiFebo figured that if he was going to make any money farming, he needed to bring the land back to good health.

So he started a grass-fed beef herd and began converting cropland that had been susceptible to erosion into grazing pastures.

“We knew putting cattle back on the land, it was going to improve soil quality quicker and with the least amount of cost,” DiFebo said.

In the two decades since, the farm—Harvest Home Meats—has become a model of sorts for sound conservation practices. Those efforts earned the farm recognition as the first-ever Pennsylvania recipient of the Leopold Conservation Award, one of the most prestigious honors recognizing conservation by private landowners.

DiFebo operates the business along with his son, Dohl DiFebo, who purchased the farm from his grandparents and other family members in 2014. His wife, Lynn, and other son, Dane, are also involved in the operation.

To the DiFebos, Farm Bureau members, the business calculation remains simple: Good conservation keeps nutrients on the farm, makes the soil healthier and leads to better production, all of which helps the bottom line. But they also have another reason to be stewardship-minded. The farm is preserved, which means it won’t be developed. But for it to remain a viable farm for generations to come, the land needs to remain farmable.

“We want to protect all these natural resources so, down the road, it can be profitable for someone,” Rich DiFebo said.

The DiFebos sell cuts of beef through a small handful of local health food stores and sell quarter and half cows directly to customers. The meat is processed by a nearby butcher. Rich DiFebo said he didn’t set out to create a specialty product. But the explosion of interest in grass-fed and pasture-raised meats has presented the farm with new marketing opportunities.

“We were basically putting cattle on the land to improve soil conditions, not knowing that we were producing a high-quality product that there was high demand for,” he said.

Presented by the Sand County Foundation, the nation’s leading voice for conservation of private land, the Leopold Conservation Award recognizes landowners who inspire others with their dedication to land, water and wildlife management on private, working land.

The $10,000 award is presented to landowners in 13 states each year in honor of renowned conservationist Aldo Leopold. It was offered in Pennsylvania for the first time last year in partnership with Pennsylvania Farm Bureau and Heinz Endowments.

The DiFebos received their award during the 2019 Pennsylvania Farm Show and the next winners will be recognized at the 2020 show.

“It was well worth doing all that stuff over the years and then to be recognized for the good we’ve done,” said Dohl DiFebo. He added that the publicity surrounding the award has also helped to educate neighbors and others in the community about the conservation practices they implement on the farm.

The farm today includes about 500 acres of both owned and rented land, much of which is grazing pasture. The DiFebos use a system of movable fences to create grazing paddocks. The cattle are moved daily to evenly distribute nutrients across the land and give sections of the pasture a long time to recover—usually about 70 days—before the next grazing.

On less erodible land, the DiFebos grow hay and other crops to feed the cattle over winter. They have implemented numerous conservation practices over the years to prevent erosion and protect water quality and even reclaimed an old shale pit to be converted into pasture.

As a result, the farm has been able to support more cattle each year without negatively affecting the health of the land. And in addition to the improved production, having a healthy pasture has eliminated the need for fertilizer and herbicides, which would be expensive.

The DiFebos are particularly proud of the work they’ve done on a 65-acre parcel they rent from the nearby Bangor Area School District. Located adjacent to a campus that includes the middle and high schools and two elementary schools, the site serves not only as grazing pasture for the farm but also an outdoor classroom and a public use trail with educational displays about the conservation practices in place.

The school district land serves as the headwaters for three streams that lead to the Delaware River. For that reason, the nearby Martins-Jacoby Watershed Association recognized a particular need to protect water quality on the land, which had been a Christmas tree farm years before. Working with the watershed, the DiFebos cleared the brush that had taken over the area to convert it to grazing pasture. They installed a solar powered well and watering system for the cattle.

The DiFebos use the site as part of their rotational grazing system and as a winter pasture. Students use the outdoor classroom and the public can come to use the trail system and learn about conservation. The National Park Service, which oversees the nearby Delaware Water Gap National Recreational Area, installed educational signs along the trail explaining conservation benefits of the site, such as how clover in the pasture draws nitrogen from the air, eliminating the need for fertilizer and reducing greenhouse gases.

“We actually have documentation that we’re reducing greenhouse emissions on that land by 92 tons per year,” Rich DiFebo said.

With their prize money from the Leopold Award, the DiFebos hope to work with the watershed association to identify more pieces of land that are critical for protecting water quality so they can expand their operation and implement similar conservation practices in those areas. They said it’s been rewarding to see many of their conservation projects come to fruition.