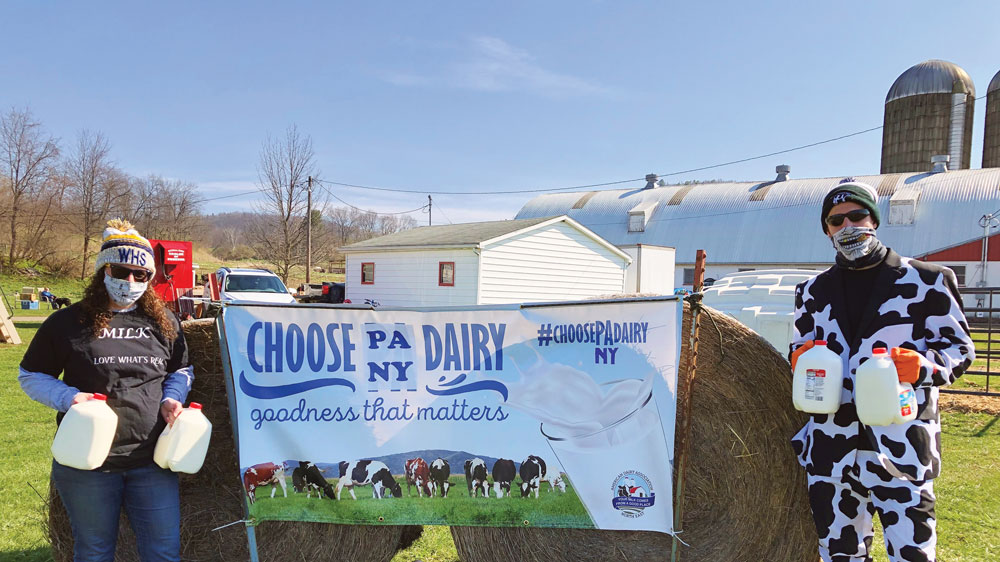 Even while facing unprecedented challenges, farmers lead efforts to help amid COVID-19 pandemic.

When her high school students returned to class—now in an online format—Kelly Taylor’s first order of business was to find out how they were coping amid the pandemic that had shuttered their school and halted much of life as we know it.

A teacher and Tioga County dairy farmer, Taylor surveyed her students about whether their everyday needs were being met, including whether they were getting enough to eat. The responses were eye-opening. Many students said they were not getting enough nutrition. One said she worried about her family members having enough food.

That would be at the top of her mind over the next few weeks, as she helped hand out more than 12,000 pounds of dairy products to families in her community through drive-through events held each Sunday since Easter on her family’s Tioga County farm just south of the New York border
“There are people who are really struggling,” Taylor, a Tioga/Potter County Farm Bureau member, said. “So we wanted to get nutritious food in the hands of people who need it.”

The effort in Tioga County is just one example of many across Pennsylvania of Farm Bureau members serving their communities during the COVID-19 pandemic, which has put many Pennsylvanians out of work resulting in many families struggling to access healthy food. Even as they face unprecedented and crippling challenges of their own, farmers have emerged as community leaders eager to help others.

Taylor got the idea for a drive-through dairy giveaway after seeing a story about a similar effort at an upstate New York college. She got in touch with Steve Wunderlich, a member of the county Farm Bureau’s Young Ag Professionals Committee, who began organizing the local campaign.

Within hours, they had collected more than $1,000 in donations through an online donation link. By Easter Sunday they had bought 2,500 pounds of dairy products and organized them into 100 boxes to distribute to families, each with at least a gallon of milk as well as a variety of other products such as cheese, yogurt, ice cream, butter, cream cheese and more.

The dairy drive-through has a dual purpose, Wunderlich explained.

Taylor and her husband, Wade, are no strangers to the challenges dairy families have faced as the pandemic has disrupted markets and sent milk prices into a tailspin. They’ve had to dump milk four times as supply has outpaced processing capacity.

In addition to supporting Pennsylvania and New York dairy farmers directly by purchasing the items to be donated, the effort is also educating the public about dairy. Along with dairy products in the giveaway boxes, Taylor and Wunderlich included samples of dairy products consumers might not be familiar with, recipes, and information about how the pandemic is affecting dairy families.

“We’re really trying to push that the entire dairy industry is struggling,” Taylor said. “It’s not just Wade and I and it’s not just our little area of Pennsylvania. It’s everywhere.”

By the time the first giveaway started, it was clear word had spread fast. Cars were lined up at the driveway entrance and Taylor and Wunderlich quickly got to work, taking special precautions to stop potential spread of COVID-19. They wore face masks and drivers were instructed to unlock their trunks or back seat doors so the box of dairy items could be put in the car without person-to-person contact.

Within a half hour, they had handed out 75 of the 100 boxes. Soon after, they were completely depleted and had to turn people away.

“That was really tough,” Wunderlich said. “I’m a rugged dude but when you have to tell a mother and three kids you can’t give them anything, that’s tough.”

But there was a silver lining. As families picked up their dairy products, each put a donation in a box at the end of the driveway. Some people even came through the drive-through just to donate. Between the in-person and online donations, there was enough to double the giveaway to 200 boxes—5,000 pounds of dairy products—the next week. After the second week, they had raised enough money to continue with the same amount for two more weeks.

“I’ve cried every Sunday because of the messages I’ve been receiving from people who are just so incredibly thankful,” Taylor said. “People will come through and they’ll take a box but they’ll also give you their last dollar.”

Wunderlich added that he and Taylor have received many offers from people who want to help pack and distribute boxes but they’re keeping that group limited to themselves and Taylor’s family to maintain social distancing. But community members are finding other ways to help. A local trucking company, for example, donated a refrigerator trailer to help with storage.

“We’ll keep going as long as the funding allows,” Wunderlich said. “Our community’s strong. They support our farmers and it really shows.”

Fayette County dairy farmer Louie Diamond was frustrated by a disconnect he saw amid efforts to help feed families in need amid the COVID-19 pandemic.
While many dairy producers were having to dump milk due to an oversupply, organizations working to address hunger in the community were having trouble getting their hands on it. Community organizations were handing out boxes of food but dairy products were not included.

“I thought: ‘There should be dairy in that box because you need it and we need to get rid of it,’” said Diamond, a Farm Bureau member.

A Dairy Promotion Program board member, Diamond reached out to American Dairy Association North East and his cooperative, Dairy Farmers of America, for help coordinating a milk donation.

“No dairy farmer wants to dump milk,” he said. “First we want to sell it. Second, we’d like to give it to someone who needs it.”

Together, they identified close to 5,000 gallons of excess DFA milk that could be donated and a Dean Foods plant with some availability to process it. Diamond helped deliver the milk to food banks in southwest Pennsylvania.

“The people at the food banks are doing a really good job,” he said. “You see on television how long the lines are. People need the food. You just pull up and they put in the car for you.”

Diamond also worked with his church to donate milk to families in his community. Church volunteers had already distributed care packages to families in need for Easter. So Diamond followed up with those same families, going door-to-door delivering fresh milk.

need,” he said. “It’s the golden rule: Do unto others as you would have them do unto you. If I was in this situation, I would hope that people would help me.”

‘Right thing to do’

As the pandemic escalated, Twin Maple Farms in Northampton County was stuck with 2,000 pounds of potatoes it couldn’t unload.

The off-grade potatoes—which are perfectly fine to eat but get passed over by shoppers because they don’t have the right shape, size or look—would typically be purchased by restaurants and other food service establishments. But with many restaurants closed or offering take-out only, demand dropped sharply.

“They were already bagged and in storage,” said Travis Hahn, who operates the farm with his uncle, aunt and cousin. “The market we had for them went away.”

So they contacted the local food bank and offered to donate them. The food bank sent out a truck to pick up the potatoes in two trips. “You put the work into it, you hate to see it go to waste,” Hahn, a Farm Bureau members said. “It’s a good feeling to do it but at the same time, it’s the right thing to do too.”

In Butler County, Brittany Speer wanted to make sure that consumers knew that farmers cared about the difficult times they are going through.

That’s why she and others with the Butler County Farm Bureau helped raise money to purchase dairy products that were given out as part of a food distribution in the county. The county Farm Bureau gave $1,000 to purchase milk from Marburger Dairy that was handed out to more than 700 families in need.

“Consumers right now are even more plugged into where their food comes from and consumers are listening,” Speer said. “We need to show those consumers what we are doing.”

When the Chevy Chase Community Center in Indiana County was in need of fresh ingredients for take out meals it was preparing for seniors and families in need, it reached out to Indiana County Farm Bureau.

“I said: ‘Just make a list of what you need and we can find these products for you,’” said Ed Rising, county president.

The county board donated $250 to get the effort started and then started reaching out to others in the agricultural community to solicit donations to purchase fresh food. Within a day, that $250 had multiplied tenfold to $2,500.

Rising, a milk hauler, worked his connections to find processors willing to sell excess products at a discount. Soon after, he and other county leaders delivered 100 pounds of sliced cheese. Next on the list is securing fresh milk for the center, then meat and fresh vegetables.

“Community members are struggling and the food banks are overwhelmed and asking for help,” Rising said. “We’re just trying to do our part to help the community. Everybody needs a little help.”